Volleyball, football and gymnastics are all established, popular sports around the world and in 2005 it was decided to put together the concept of the three combined into one game. It gave rise to Bossaball, a team sport that originated in Spain. Generally, featuring on beaches as a favourite location, it is played on an inflatable court separated by a net. On either side of the net is a trampoline. The game is played between two teams of four players with the objective to ground the ball on the opponent’s side of the court. The height of the net can be adjusted depending on whether the match is for professionals, intermediates, those new to the sport, or for children. Players are not allowed to touch the net and must also aim to remain on their own side of the court as much as possible. Men and women can play in the same team. One player, known as the attacker, is positioned within the circular trampoline. The remaining three in the team are positioned around the attacker on the inflatable court. To start a match, the server throws or kicks the ball in the air and attempts to hit the ball over the net so that it lands in the court area of the opposing team. The opponents attempt to return the ball back over the net using no more than five contacts with the ball. A player can use any body part to achieve this.

A volley touch is according to traditional volleyball rules. It is one single touch with the lower arms or hands, a spike, or a drop shot. Guiding the ball for more than one second is not permitted. A football touch is with any part of the body except the hands or arms. The ball can also be touched up to two times. Within the five maximum touches and once the second pass has been played, there must at least be one football touch technique. Bossaball is a fast-growing sport and is currently played in over twenty nations across four continents. Bossaball International is the organisation responsible for setting up national and international tournaments. In order to grow the sport further, training camps and road shows are often conducted. The sport often features at music festivals or in conjunction with other sport tournaments. In 2009 Turkey hosted the first World Cup with the Netherlands as the winners and a year later, the first European Cup was held. On this occasion Belgium was victorious. Since then, the major tournaments have only been won by these two nations. 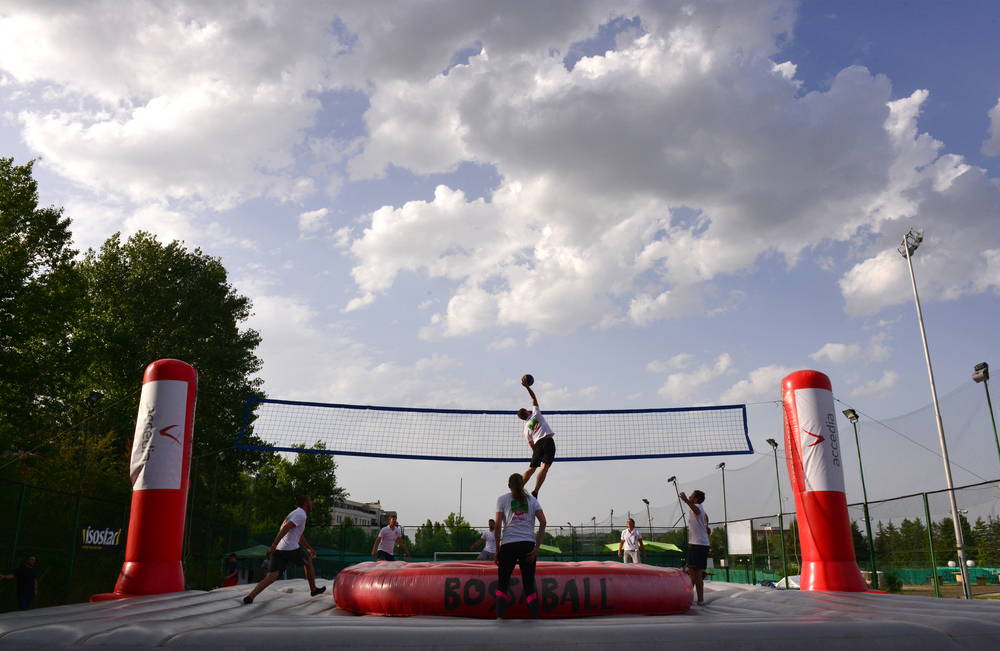