Axe Throwing is a relatively new sport with the International Axe Throwing Federation (IATF) established as recently as 2016. The purpose of IATF is to regulate the sport through the creation of a standard set of rules, representing members worldwide, while promoting safety and sportsmanship during competitions. The current established rules date back over 16 years and has led to the formation of a league of over 10,000 competitive axe throwers in existence today. Apart from international growth, IATF also sanctions the International Axe Throwing Championship held every year at the end of the various league seasons.

There are several established leagues around the world. The sport of Axe Throwing is very prominent in the USA and Canada, while leagues also exist in Australia, Poland, Great Britain and Singapore. Axe Throwing is generally an indoor sport among all the professional leagues, but it also features strongly at the World Lumberjack Championship and other outdoor exhibition competitions. The goal of a competitor is to throw the axe at a wooden target area like a dartboard, attempting to hit the bullseye as near as possible.

The target area is generally thirty-six inches wide with five rings and each area counts towards a certain number of points. The outer ring will be the lowest score, while the bullseye is the highest. The distance between the competitor and the target is 21 feet for most competitions, but some leagues also range from 15 to 30 feet. Each player gets five throws and must not step over the throwing line. As the sport of axe throwing can potentially be very dangerous, the throwing area must be always kept safe. The target area must always be taped off and at most venues it is fenced off. Spectators always sit behind the throwing area. IATF will continue to bring various leagues together under a central rule system and grow further international awareness and membership. 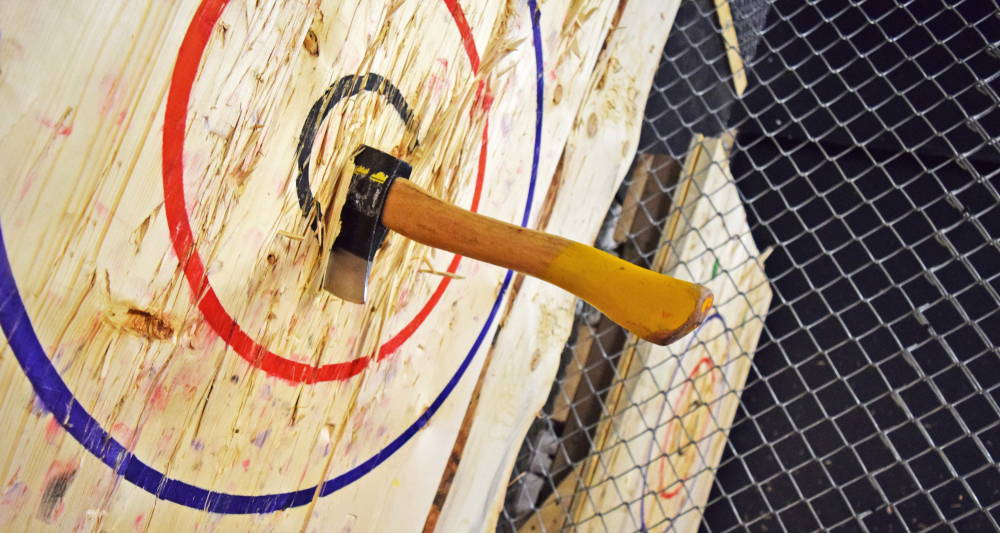