The game of Pato began in Buenos Aires in the early 1600s as a “corrida” (a race) during the celebrations for San Ignacio de Loyola. Two teams of gauchos (men on horseback) were formed and often, the "goal" was each team's ranch, which could be at 5 kilometers or more. A live duck would be inserted in a leather ball, leaving its head out, and they would attach two or more handles to the ball. The strongest in each team would attempt to steal the “pato” (duck) and gallop until they reached their own goal, which gave them the winning score. During the stealing, a lot of players would not let go of the pato, causing them to fall from the horse, be dragged or trampled on by the other horses, and other tragic events affecting not only the players but also the duck.

Pato has been a controversial sport since its inception. Not only was the game the source of violence, outbursts, and tragic results, but it was also a sport in which regulations were not completely established. More than one hundred years after the sport was invented, religious authorities started taking matters into their own hands, banning the sport. Soon after, government authorities joined in the attempt to ban the sport, but they failed.

In 1937 a ranch owner reinvented Pato, creating a set of rules and regulations, the chair, and the 6-handle ball with which they play nowadays. It was not until 1941 that the Argentinian Federation of Pato was created to give this once violent sport a new beginning. In 1953, Pato was named the national sport of Argentina and has been played ever since.

A modern pato game is a mix of polo and basketball. It consists of two teams with four players, each of them riding on horses. They all fight for the possession of the 6-handle leather ball and try to score by throwing it through a vertically positioned ring with a long net. The rings have a diameter of 1 meter and are located on poles at a height of 2.40 meters. The field is approximately 220 meters in length and 90 meters wide, and the ball has a 40 cm diameter. Games last six 8-minute periods and the winner is the team with most goals scored. 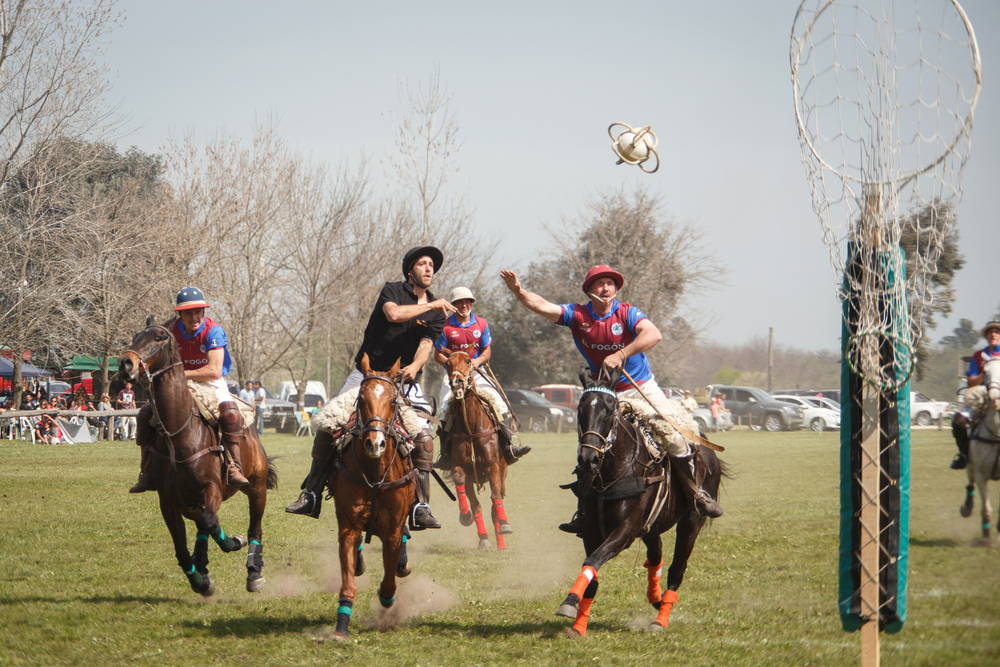